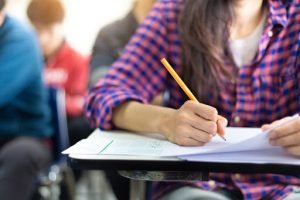 As kids return to “physical” school, the dust is settling from months of virtual learning that stirred up plenty of struggles and challenges for educators, parents, and students. One of the major side effects of online education was a significant rise in cheating, which ultimately means that many students are returning to classrooms less prepared because they didn’t learn the material. While we don’t yet know what the long-term effects will be, there is concern that one of the fallouts of online cheating habits could mean that students missed out on critical foundational learning they will need to perform well in school this year (and beyond) and on their SAT or ACT exams – key factors that affect college admissions.

The Staggering Facts on Online Cheating
According to Scott McFarland, CEO of ProctorU, which provides proctoring to test administrators, despite trained proctors watching test-takers and checking their IDs, instances of cheating rose dramatically last year. Before Covid-19 forced millions of students online, his firm’s proctors caught people cheating on less than 1 percent of the 340,000 exams it administered from January through March last year. However, when the number of exams it supervised from April through June jumped to 1.3 million, the “caught cheating” rate rose above 8 percent — an 800% increase, even with trained proctors present. And that led McFarland to remark, “We can only imagine what the rate of inappropriate testing activity is when no one is watching.”

It’s pretty clear that nobody was watching, or the watching was wholly inadequate: as reported in a December 2020 Wall Street Journal article, “One mother in Southern California said that both of her teenage sons, who had never cheated in person, did so recently in remote school.” In that same wsj.com article, Colleen Morris, a high school English teacher, is quoted as saying, “Some parents have told me that their children have had to ‘collaborate’ with friends on assignments and tests because they feel it’s the only way they are learning much this year.”

While much of the information on students cheating deals with college and high school students, the actual problem is far more widespread. The wsj.com article also states that there is evidence that much younger students could also be cheating—or at least getting help from parents. Curriculum Associates, a provider of online curricula and assessments for more than 8 million elementary and middle-school students nationwide, analyzed diagnostic assessment data and found remote students at all grade levels were scoring higher in reading than students in previous years. Some of the age groups also scored higher in math.

“The problem with saying cheating is acceptable here is [that] it becomes an ethical slippery slope, where cheating on one exam may lead to cheating on other exams or in the workplace,” said Steven Mintz, a professor emeritus at California Polytechnic State University in San Luis Obispo who writes an ethics blog. “Cheating can become habitual. With kids, you’re trying to develop good habits so they can apply them to later situations in life.”

Take Action Sooner Rather Than Later
We’re all eager to put the last year behind us and perhaps, even if your child did cheat on online tests and assignments, it doesn’t mean they will continue to cheat. After all, it was a year like no other. You can model that “honesty is the best policy” by having a sincere, heart-to-heart with your student to express your concerns and compassion for any stress they might feel. Then educate them about the consequences, which go far beyond reprimands from school officials. Help them see the big picture, which is that if they’re not truly gaining knowledge, their grades will likely fall and they may not have the solid foundation necessary to reflect their true potential on standardized tests. Ultimately, this may make it more difficult to get into a college, rendering the “good grades” garnered from cheating meaningless.

Get Help!
If you notice that your student is struggling in school this year, don’t wait. They may need a little extra help to catch up so they don’t fall too far behind. Working directly with an instructor or tutor can assist them in addressing any areas of weakness and improving their knowledge and competency so they can perform at their highest level now and in the years ahead.

Jason Robinovitz is the Chief Operating Officer of Score At The Top Learning Centers & Schools, a family owned group of tutoring companies and schools in South Florida. As team leader for a staff of more than 100 educators, Jason is in charge of strategic decision-making, including best practice policies, customer service, staffing, training, marketing, systems, and technology. Jason is a current member of the NTPA Board of Directors as well as an active member of the Independent Educational Consultants Association, the National Association for College Admission Counseling, and the Secondary School Admission Test Board.